The standard (mathematical) measure for the level of inbreeding is the Inbreeding Co-efficient. It indicates the probability (between 0% and 100%) that genes at a randomly chosen location in the DNA are identical by descent. The technique assumes that there are 2 forms of a gene and that each form has an equal chance to be passed on to the next generation.

* minimum value, will be higher if ancestors are themselves inbred

Not surprisingly, smaller populations tend to have proportionally more animals with higher inbreeding coefficients than larger populations - simply because there are fewer candidate animals to select from (Figure 1). 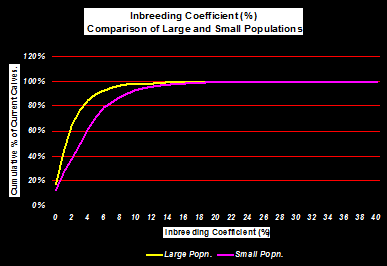 Explanation of inbreeding in animal populations relies on a few basic genetic principles. Genetic information is stored in Chromosomes. Chromosomes are made up of DNA. Genes are sections of DNA and occur in pairs. A particular gene will occur at a particular site (locus, plural is loci) in the DNA of a particular Chromosome. The different forms of a gene (usually 2) that can occur at that locus are called alleles. Where both alleles are the same at the locus, they are called homozygous. Where the alleles are different, they are called heterozygous. In general, the two alleles will have an equal influence on the performance of an animal. That is, the heterozygous form (both alleles are present) tends to have performance midway between the two homozygous forms. In a few cases, one allele will have the main (dominant) effect on an animal, while the other allele will only have an effect in its homozygous form. These are called dominant and recessive genes.

Example of calculating an Inbreeding Coefficient for an animal that has a common great grand parent: 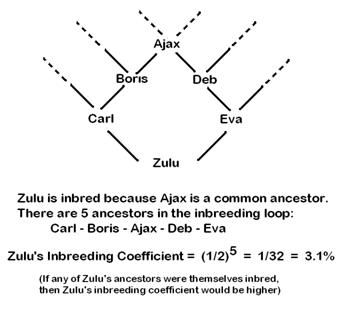 As inbreeding increases, the frequency of alleles being homozygous at a particular locus also increases. Hence inbreeding reduces the amount of variation in a population.

The converse of inbreeding is out-crossing. Some component of observed hybrid vigour is the out-crossing effect. Note that two inbred animals that are unrelated themselves will have fully out crossed progeny (inbreeding coefficient of zero). Hence, you can go from inbred to out crossed in one generation.

Inbreeding depression is a term used to describe the reduction in performance and viability due to the increase in inbreeding levels (reduced genetic variation). Reproductive fitness tends to be affected more than performance traits in this respect. The extent of inbreeding depression depends on the population being measured, the level of genes already fixed in the population, the frequency of any deleterious genes that may exist in the population and chance effects of which particular genes are affected.

There is no defined limit as to what is an acceptable level of inbreeding in domestic animal populations. However, inbreeding depression is likely to be more apparent once inbreeding levels get to above 10%. As a very rough guide, there is often a 2-20% decrease in performance of the trait per 10% of inbreeding coefficient.

The Arthrogryposis Multiplex (AM) gene is an example of a recessive gene that is lethal. The undesirable allele (a) in its homozygous form (aa) causes the affected animal to have a bent and twisted spine and limited muscle development, but with apparent normal brain tissue. Affected calves are generally still born. Conversely, animals with at least one copy of the dominant allele (A) are normal, unaffected calves (ie the homozygous AA or heterozygous Aa forms of the gene). The heterozygous animals (Aa) are called carriers as they have the potential to pass on the undesirable form (a) of the gene undetected to the next generation.

A genetic test is now available to detect which alleles the animal actually has - ie whether an animal is homozygous for the desirable allele (AA) or is a carrier (Aa).